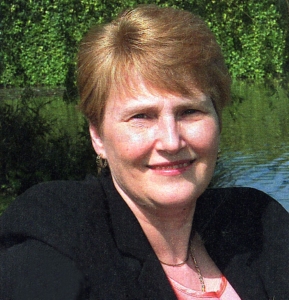 Kit Domino’s childhood was spent in West London alongside the banks of the River Thames, with Richmond, Kew and Osterley Parks as her extended playgrounds. Now living in South Gloucestershire, she spends much of her time writing and reading and travelling, especially to the Greek Islands which inspire much of her work. In 2004 she was shortlisted for the Harry Bowling Prize with her London saga Every Step of the Way.

Kit writes in several genres including sagas, timeslip and mystery/paranormal.  As well as a keen gardener, Kit is also an international acrylic artist. Learn more about Kit Domino at http://kitdomino.com/

About Every Step of the Way 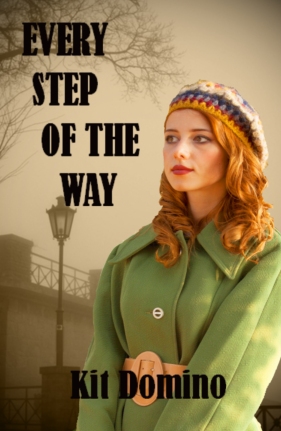 1952 in West London. A time of coffee bars and jukeboxes, Teddy boys and gang fights. As Christmas approaches, sixteen-year-old Beth Brixham has so much to look forward to. No more school, her first job, her first boyfriend. Instead, her world is thrown into darkness and chaos as the Great Smog descends over London, leaving in its wake a trail of death and disruption and changing Beth’s life forever.

When family tragedy strikes during the coronation of Queen Elizabeth II, Beth finds herself shunned by her father. Faced with eviction, she must battle against the prejudices, laws and social bigotry post World War II in an effort to prevent her baby sister being taken into care, but she hadn’t gambled on the price she has to pay when offered a radical solution.

“Every Step of The Way.  Loved it!  Not the type of thing I would pick of the bookshelf so looked forward to it. Fell straight into it and like Kit’s style of writing.” Gary Palmer, August 2010.

“Every Step Of The Way is an amazing story, it transports you back into the 1950s with ease and a realism that is at times quite harsh. From the thick, pea-soup fog, to the way young women had to fight to retain their own identity; it’s a piece of social history in the telling. Your heart will go out to Beth as she struggles to hold things together, the victim of a set of circumstances that are almost impossible to imagine. At times graphic, at times making you feel angry as you accompany her, you find yourself willing her on to fight those battles. I is easy to see why this story was shortlisted for the Harry Bowling prize! You turn the last page thinking ‘and what came next…’ – I’m waiting for the sequel – there has to be one! A pleasure to read, it leaves a lasting impression.” Linn B Halton, March 2012

“A richly evocative saga depicting a period of the twentieth century that few writers have attempted. All I can say that is that this is one author to watch for the future.” JG Goodhind (author Honey Driver series), April 2012